Join us for a fully-guided hike that ventures down to the River of Rocks boulder field. Participants should anticipate rugged natural trails. The hike will be followed by optional wine and cheese in Schaumboch’s cavern with some Hawk Mountain staff!

A Successful Summer Season for the Broad-winged Hawk Project 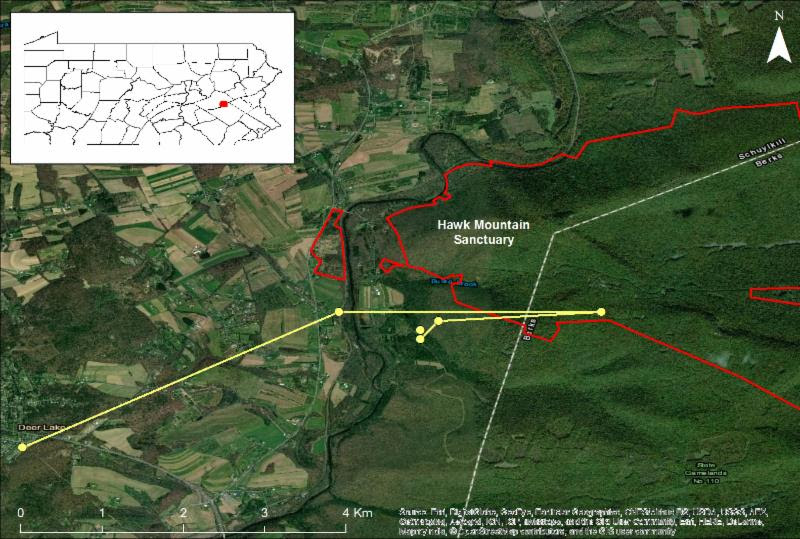 In June 2018, Hawk Mountain staff and trainees successfully trapped and tagged two adult male broad-winged hawks, the first males to ever be equipped with satellite transmitters.

The Broad-winged Hawk Project team has tagged and tracked female broadwings every year since 2014, using the satellite data to observe the species’ movement ecology year-round, in addition to recording nesting behaviors during the summer months. This work continues to be supported by the Kittatinny Coalition and several private donors.

The first male, named Brady, was tagged at the base of Hawk Mountain, at the same nest site as a female tagged in 2015, Ridgena.  The couple have produced two successful young consistently since 2014, and this year was no different. Following the nesting season, both raptors used a similar range, spending most time on mountain slope but also visiting forests on the west side of Route 61. 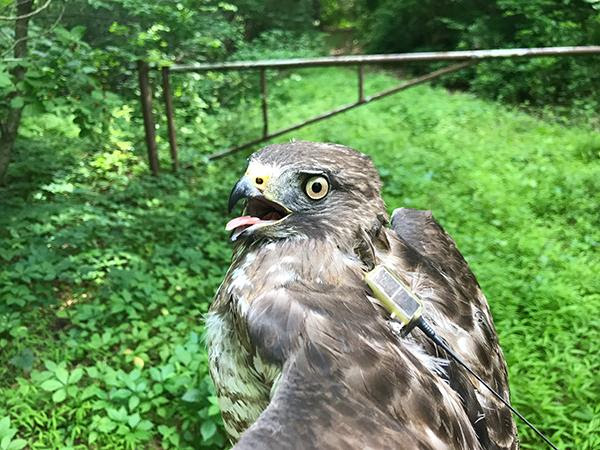 Broun, the second tagged male, was captured on the Kittatinny Ridge north of Shartlesville. He was initially banded in 2014, when the Sanctuary team equipped one of his chicks, Kit, with a satellite unit. Due to his recapture, he now has a satellite transmitter in addition to his bands. His range includes both sides of the Ridge, while his offspring Kit used mainly the south slope prior to migration.

Due to the small body size of male broadwings, the equipped satellite transmitter and accompanying solar-powered battery had to be smaller than what has been used for the females. Both Brady and Broun’s units stopped signaling after a few days, indicating that their reduced solar panels cannot hold the charge as long and are currently not getting enough sun to recharge the unit battery.

The team hopes that as the birds leave the forests and start to soar south for autumn migration, the units will recharge and continue to provide interesting movement data. To follow the male movements along with the two females still signaling, visit the interactive map at hawkmountain.org/birdtracker.

Visit hawkmountain.org/events to see all of our 2018 programs, workshops, and more. Thank you for your support!

Written by Erica Ramus on August 19, 2018. Posted in Outdoors, Pennsylvania